It’s been a while… but it’s monday and I felt like doing something other than freaking out today, so here I am again.

An Anatomical Venus is a wax model of a female, that either has her organs in sight, or can be dissected by means of removable parts. The dolls were invented in the late 18th century (Victorian Era) to educate both physicians and laymen about the peculiarities of female anatomy. If not in a medical institution, an Anatomical Venus could often be found on display in traveling sideshows. Women were allowed and even encouraged to visit these expositions, as it was deemed important they learned about the workings of their own body. The displays also served to warn the general populace of the dangers of promiscuity, as there was often a whole section of them devoted to venereal diseases.

Nevertheless, the models usually had very beautiful features, and sometimes they were placed in oddly sensual positions. The contrast between esthetic attraction and repulsion is quite strange… and to me, quite enticing also. 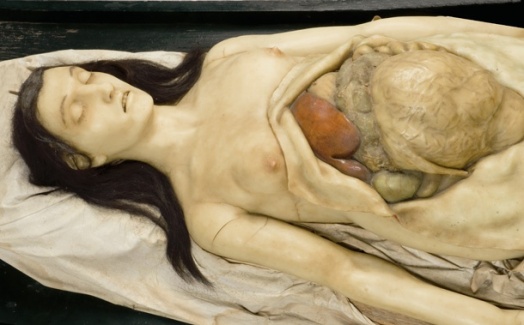 There just is something about seeing a beautiful woman with her skin peeled back and her organs spread out on the table that sends a tingle of delight over my skin… I don’t think I need to elaborate on why I picked this for Memento Mori monday, right?

It reminds me of some modern art by Daniel Hirst I saw in an exposition lately, but stranger, knowing that these weren’t meant as art per se.

This is basically the predecessor of the famous Körperwelten exposition, and I imagine it must have drawn a similarly intrigued public back in the days…

For more information about the Anatomical Venus, check:http://www.wellcome.ac.uk/en/wc/anatomical-venus/index.htm

For more intriguing pictures of anatomical models and doctor dolls, this Pinterest board is without compare:

My name is QuantumPhysica The Insane, but you can call me QP. I am insane, admitted to a mental hospital in Belgium, and waiting for a decent diagnosis at the moment. Once I was a physics student with goals in life and what more; now I'm simply the patient of Room 93. Ever wondered what life is like in the psychiatric ward? I'll tell you everything you ever wanted to know... I am... particularly twitchy of personality. But I also am genuinely interested in everything. There is nothing that doesn't interest me, really. Everything, from quantum computers to fashion and cars to traveling... I also give advice. On anything. No taboos whatsoever. And I make lists of things...
View all posts by quantumphysica →
This entry was posted in Art and tagged 18th century, anatomical venus, anatomy, art, beautiful, bizarre, corpse, curiosity, dissection, doctor dolls, enticing, female anatomical model, freakshow, insane, insanity, interesting, medical science, oddity, organs, strange, unusual, venus, victorian age, wax models, weird. Bookmark the permalink.