Waving The Red Flag: On Bad Taste And Menstruation

My mother was always very open about it; I knew how everything functioned way before I needed it, and it was no stranger to me than the fact that humans have to pee and poop. In this I was apparently an exception. Many children in my age group had no idea about it to begin with, and that it was all very “hush-hush”. I remember being reprimanded in 4th grade for telling my classmates “inappropriate things”, because I had explained them what the tampon they had found on the toilet floor was for. And it kind of stayed that way, even when we grew up. “Iew, we don’t talk about that” was the usual reaction whenever the subject came up.

And this was in Western Europe, average middle class society; in other countries the taboo is much bigger. When you read what people write about period taboo on the Menstrupedia Blog, which is run mostly by Indian women from what I’ve seen, it makes your head spin that these practices still exist. (Locking a menstruating woman in a separate room for 4 days, anyone?)

Did you know that the first ever feminine hygiene ad to feature a tiny speck of red was only published in 2011? And it was called a “historical advertising move”. I mean, come on! Yes, menstruation means a woman bleeds from her cunt. So what? Why are we so uneasy about it? (And we really, really are. Tampax even launched a line of tampons with “extra discreet” wrappers, so they can’t crackle when you open them in a public toilet.)

From what I can tell, the taboo is just another one of those hidden misogynist mechanisms in our society, grown from not-understanding the workings of the human body, perpetuated by religion and superstition, and by now so ingrained in our thoughts that we don’t even realize it anymore. In a way it’s no different from the kind of thinking that is now widely called “rape culture” (like asking what a woman was wearing when she was assaulted), and we should not allow it to flourish as it does.

So consider this is my little stand against Menstruation Taboo. Abandon “good taste”, and celebrate the fact that women have a well-functioning reproductive system! I’m not saying women should be all “powerful moon goddess-y” about it, but sometimes a good kick in the butt of decorum can help making something more accepted…

This T-shirt, designed by artist Petra Collins, was sold by American Apparel a while ago. It caused a stir on the internet for being “gross” and “inappropriate”, but I think it’s a rather thought provoking piece… It’s no longer for sale, but you can find more epic and ever so slightly disturbing stuff of Petra and her fellow artists on http://www.theardorous.com 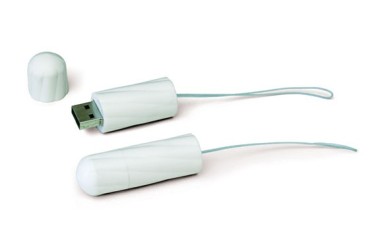 The Tampon Flash Drive by Meninos is something you might just get away with if people have a sense of humor at your place of work. Pygmy-Hippo’s “Glittery Tam-Pin” -now also in pink Valentine’s edition) might cause a bit of a stir though… (but that’s what we want, no? Besides, wearing tampons as jewelry has even been done by an MSNBC host.)

Yes, that is blood. The art project “Beauty In Blood“, run by the husband-and-wife team Rob and Jen Lewis, examines the aesthetic qualities of menstrual blood in abstract photography… and in my opinion, it’s strangely attractive. Prints and cards of their work are for sale on Etsy!

And last but certainly not least: The Period Store! Their tagline “Reimagine The Way You Experience Your Period” tells it all, really. The principle is simple: you subscribe to their service, and every month you get a custom “period care package” delivered to your home,  with the tampons/pads/moon cups/… of your choice, tea especially for menstrual cramps, candy, an art print, aroma- or heat therapy stuff, and tons of other goodies you can choose yourself. If I wasn’t so broke, I would totally do this!

That’s it for now; I’d like to know your opinions on the topic of menstruation and the surrounding taboo. Also, if you happen to know of another nice period-themed item, feel free to share!

My name is QuantumPhysica The Insane, but you can call me QP. I am insane, admitted to a mental hospital in Belgium, and waiting for a decent diagnosis at the moment. Once I was a physics student with goals in life and what more; now I'm simply the patient of Room 93. Ever wondered what life is like in the psychiatric ward? I'll tell you everything you ever wanted to know... I am... particularly twitchy of personality. But I also am genuinely interested in everything. There is nothing that doesn't interest me, really. Everything, from quantum computers to fashion and cars to traveling... I also give advice. On anything. No taboos whatsoever. And I make lists of things...
View all posts by quantumphysica →
This entry was posted in Art, Design, Fashion, Philosophy and tagged Always, Always ad, American Apparel, art, awesome, awkward, Beauty in Blood, bizarre, bleeding vagina T-shirt, blood, crazy, design, Etsy, Fashion, funny, good taste, insane, insanity, mad, madness, Menninos, menstruating, menstruation, menstruation taboo, Menstrupedia, mental, mental illness, mental patient, period, Petra Collins, photography, psychiatry, psychosis, Pygmy Hippo, rape culture, schizophrenia, sick, strange, style, stylish, taboo, Tam-pin, Tampax, tampon brooch, Tampon flash drive, tampons, weird. Bookmark the permalink.

3 Responses to Waving The Red Flag: On Bad Taste And Menstruation