Posted on April 7, 2014 by quantumphysica

It’s monday again! This week’s Memento Mori is practical in many ways, but mostly it shows us a practical way of “thinking on death” that I hadn’t touched upon before. Back in the days (we’re talking 15th, 16th century here) people thought coral had magical powers; it would keep away evil spirits, neutralize poison, bring good luck, etcetera. It’s for that second property that they decorated cutlery with it. In those days, it was customary to bring your own cutlery to a formal dinner, and people believed the coral would protect them from any poison their host or fellow guests might try to mix in their food. 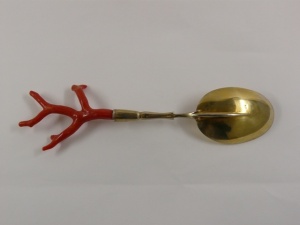 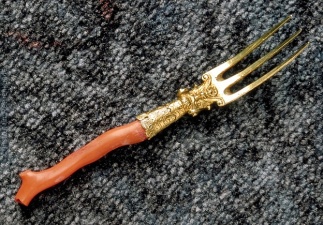 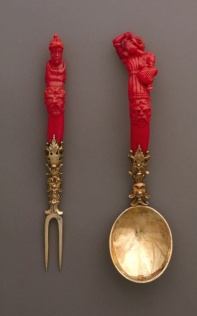 In case you like the look of these, you can find modern versions of “coral” cutlery in a variety of stores. They don’t use real coral though. (There was a nice and affordable set in the Zara Home collection but it’s no longer available in red *sadface*, luxury brand L’Objet has an also very nice but much less affordable collection, and I’ve seen lots of pieces on World Market and Amazon.)

My name is QuantumPhysica The Insane, but you can call me QP. I am insane, admitted to a mental hospital in Belgium, and waiting for a decent diagnosis at the moment. Once I was a physics student with goals in life and what more; now I'm simply the patient of Room 93. Ever wondered what life is like in the psychiatric ward? I'll tell you everything you ever wanted to know... I am... particularly twitchy of personality. But I also am genuinely interested in everything. There is nothing that doesn't interest me, really. Everything, from quantum computers to fashion and cars to traveling... I also give advice. On anything. No taboos whatsoever. And I make lists of things...
View all posts by quantumphysica →
This entry was posted in Art, Design and tagged 16th century, 17th century, antique, beautiful, coral, coral cutlery, cutlery, dead, death, fork, history, insane, insanity, interesting, knife, madness, memento mori, morbid, paranoia, poison, psychosis, schizophrenia, silver-gilt, spoon, tableware, thinking on death. Bookmark the permalink.