A Chronicle Of Things… QP’s Life In Objects

I have this box, it’s a small lacquered wooden jewelry box with red satin cushioning on the inside, and I have had it for a long time. Over the years, it has slowly filled up with tiny pieces of memory. And now, when I open it, I see a report in objects, a chronicle of my life told in things. My other life. A life that lies behind me forever now, and I look back on it both fondly and melancholically. 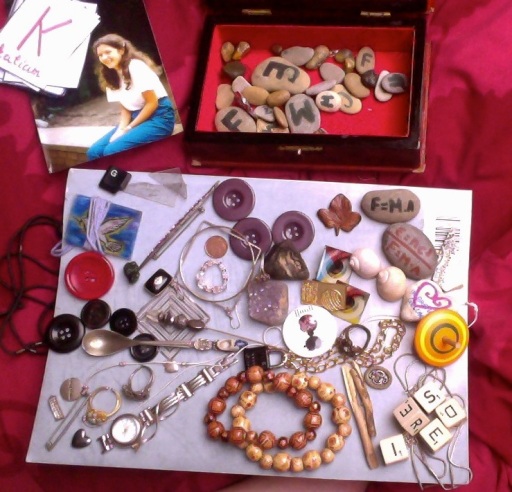 Most of these objects will seem senseless to you, I know. But every single one of them carries a meaning. A part of my past. Facing this box hurt, because it tells a story of dreams, hopes and friendships that I’ve lost along the way. Sometimes an object in this box is all what’s left to remind me of them.

I don’t know why I wanted to share this. I suppose it’s my own take at mourning. The psychiatrist said I’m going to a process of grief, after all. Ask me the story of these things. Let me tell it one more time. Maybe I should bury the box after that, allow it to be dead and gone like the things it represents.

My name is QuantumPhysica The Insane, but you can call me QP. I am insane, admitted to a mental hospital in Belgium, and waiting for a decent diagnosis at the moment. Once I was a physics student with goals in life and what more; now I'm simply the patient of Room 93. Ever wondered what life is like in the psychiatric ward? I'll tell you everything you ever wanted to know... I am... particularly twitchy of personality. But I also am genuinely interested in everything. There is nothing that doesn't interest me, really. Everything, from quantum computers to fashion and cars to traveling... I also give advice. On anything. No taboos whatsoever. And I make lists of things...
View all posts by quantumphysica →
This entry was posted in Insanity and tagged art, awkward, bizarre, box, broken, broken dreams, collection, crazy, depression, grief, history, hope, hopelessness, insane, insanity, loss, lost, lunatic, mad, madness, memories of the past, memory, mental, mental illness, mental patient, mourning, objects, other life, pain, past, physics, psychiatrist, psychiatry, psychology, psychosis, remembering, sad, sadness, schizophrenia, science, secrets, sick, strange, suicide, weird. Bookmark the permalink.