I got an Award!

Posted on September 30, 2012 by quantumphysica 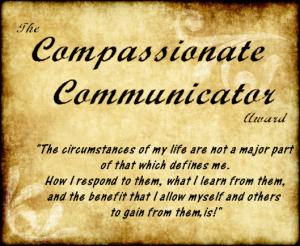 I was awarded the Compassionate Communicator Award by http://prideinmadness.wordpress.com, and it really made me blush. I’m so happy when I can inspire people out there… So, onto the specifics of this award:

1. That in awarding it to a blogger you simply link it to one of their blog posts which you feel has personally benefited you in some way.

2. You give a brief explanation of why you feel it benefited you

3. On accepting the award you link back to and thank the person who awarded it to you.

And then there is WaywardWeed, a mother with a schizophrenic son. She doesn’t post that often, but sometimes I find it striking what she writes. It lifts a tip of the veil that covers the other side. Being a mental patient myself, the anguish and sadness my parents experience is often hard to understand. Her posts make me think, in specific this one: http://waywardweed.wordpress.com/2012/09/06/what-did-we-do-to-deserve-this/

To end, Miss Misfit. I can’t really describe it, but when I read her posts it felt as if something clicked inside me. Sounds stupid, but it’s true. They felt so relatable that I was almost scared to read on. I would say read all of her posts, but if I had to point out one: http://themisadventuresofmissmisfit.wordpress.com/2012/09/09/a-first-person-narrative/

So, and that’s for the awarding so far!

My name is QuantumPhysica The Insane, but you can call me QP. I am insane, admitted to a mental hospital in Belgium, and waiting for a decent diagnosis at the moment. Once I was a physics student with goals in life and what more; now I'm simply the patient of Room 93. Ever wondered what life is like in the psychiatric ward? I'll tell you everything you ever wanted to know... I am... particularly twitchy of personality. But I also am genuinely interested in everything. There is nothing that doesn't interest me, really. Everything, from quantum computers to fashion and cars to traveling... I also give advice. On anything. No taboos whatsoever. And I make lists of things...
View all posts by quantumphysica →
This entry was posted in Insanity and tagged Award, awesome, bizarre, Compassionate Communicator Award, crazy, insane, insanity, lunatic, mad, madness, mental, mental illness, mental patient, pain, psychiatrist, psychiatry, psychology, psychosis, sadness, schizophrenia, sick, strange, weird. Bookmark the permalink.

6 Responses to I got an Award!