Posted on February 20, 2012 by quantumphysica 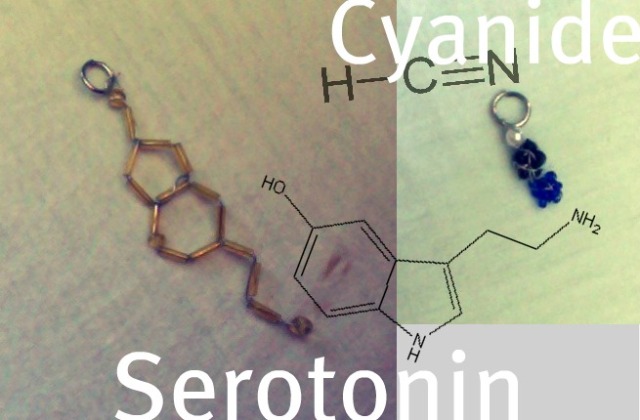 Before you ask: YES THAT SEROTONIN MOLECULE IS WRONG. I know it, and I’m pretty pissed off at the dude that put a picture of something else online saying it was serotonin. Death to all molecule forgers! (and to me, because I was too stupid to use my psychotic head and THINK before making it a pendant)

That’s why I also added Hydrogen Cyanide… A molecule I secretly admire, although my psychiatrist better not hear that… There is no real correlation between my molecule pendants and the hilarious webcomic “Cyanide and Happiness”, but I found it amusing I had been making exactly these two molecules today… Maybe I’m depressed because my head doesn’t know how to make serotonin either… *sigh/giggle*

My name is QuantumPhysica The Insane, but you can call me QP. I am insane, admitted to a mental hospital in Belgium, and waiting for a decent diagnosis at the moment. Once I was a physics student with goals in life and what more; now I'm simply the patient of Room 93. Ever wondered what life is like in the psychiatric ward? I'll tell you everything you ever wanted to know... I am... particularly twitchy of personality. But I also am genuinely interested in everything. There is nothing that doesn't interest me, really. Everything, from quantum computers to fashion and cars to traveling... I also give advice. On anything. No taboos whatsoever. And I make lists of things...
View all posts by quantumphysica →
This entry was posted in Fashion and tagged asylum, bipolarity, cyanide, death, depression, design, dopamin, dying, epic fail, fail, Fashion, geek chic, geeky, handcrafted, hydrogen cyanide, insane, insanity, jewelry, lunacy, lunatic, mad, madhouse, madness, mental hospital, mental illness, mental patient, molecule, neurotransmitter, pendant, pendants, poison, psychiatric clinic, psychiatrist, psychiatry, psychosis, serotonin, strange, suicide, weird. Bookmark the permalink.